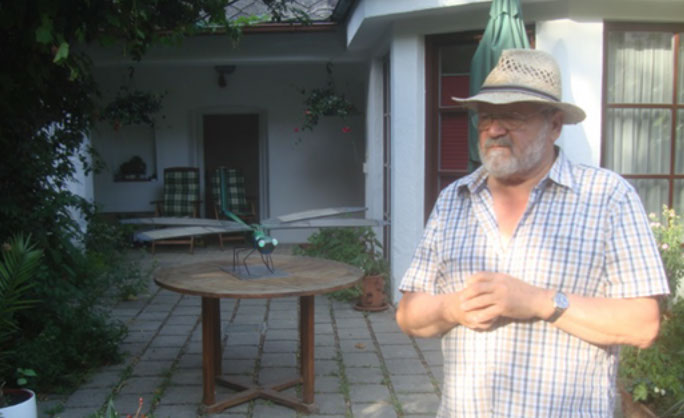 The Holzerhof
n the beginning of 2013, Sepp Holzer left the Krameterhof, the farm he was born on.  He handed it over to his son, Josef, as his father once handed it to Sepp, and left the mountainside with his wife Veroni to begin his new farm, the Holzerhof.
The site of the Holzerhof is nine hectares (about 23 acres) with a northern aspect in the warmest and driest region in Austria, in contrast to the Krameterhof in the coldest region.   The other farms around are primarily chemical dependent.
The Holzerhof is a paradise in stark contrast to these mono-culture farms because Sepp’s approach uses perennial-based systems with an upper canopy of nut trees reaching over 100 feet high, lower edible fruit trees and berry bushes with grape vines growing into the canopy and a host of smaller plants and bushes blanketing the earth with a thick living mulch.  There’s no bare ground like between every row on his neighbors’ farms.  Instead of loosing topsoil with conventional techniques he builds soil while sequestering carbon and limiting erosion.
This piece of land is not new to Sepp.  Ten years ago, he had a project on the western half of the property.  Upon completion of the project, the land saw no maintenance or care.   Fast-forward ten years later, and the ecosystem is flourishing!  The terraces are green and featuring a wild abundance of apple, peach, quince, cherry, hazelnut, grapes, and host of other edible species.  This is a true testament to the power of Sepp’s techniques and working with the forces of nature to create resilience.
Upon Sepp’s arrival, he immediately set to work creating a truly visionary and masterful water catchment using a tremendous terrace set at the bottom edge of mature nut trees.  The terrace extends hundreds of feet and catches the underground water seeping through the hillside.  This is then directed to a cistern that in turn provides the house with the highest quality drinking water.  The spring feeds a wooden water trough with the excess water feeding bananas, corn, ginko biloba, cosmos, and more.
Another interesting species that has taken root on the Holzerhof are redwoods.  The Holzerhof is starting to see unique species from regions of similar latitudes and experiencing similar average temperatures.  Micro climate techniques using earthworks, stone, and water open the possibilities for a wider range of species to appear.  To quickly fill out the ecosystem and attract diverse creatures to the farm, different kinds of worms, grasshoppers, and other insects were released.
At the bottom of the terraces Sepp has creating a series of ponds interconnected hit the Holzer monk system.  With heavy clay based soils Sepp has been reinforcing the bank with Black Locust posts driven in the ground to both secure the slope and wick water from deeper in the soil horizon.  Willow cuttings are planted right up against the posts, as the wicking from below provides them enough moisture to root.The Holzerhof has seen a quick transformation which is still in progress.  It’s a very rare opportunity to see this process in motion as Sepp continues turning this farm into his vision of paradise.
For more on Holzerhof
please visit www.SeppHolzer.at